Lorelei Bell of Lorelei's Muse has signed with a new publisher, who is giving her Sabrina Strong vampire series a whole new makeover with new covers and titles. ASCENSION is the first book in the series (formerly titled Vampire Ascending), and Lorelei is generously giving away one signed paper copy (US only). The contest will run from March 15 - 22 with the winner announced on Lorelei's blog on April 1. 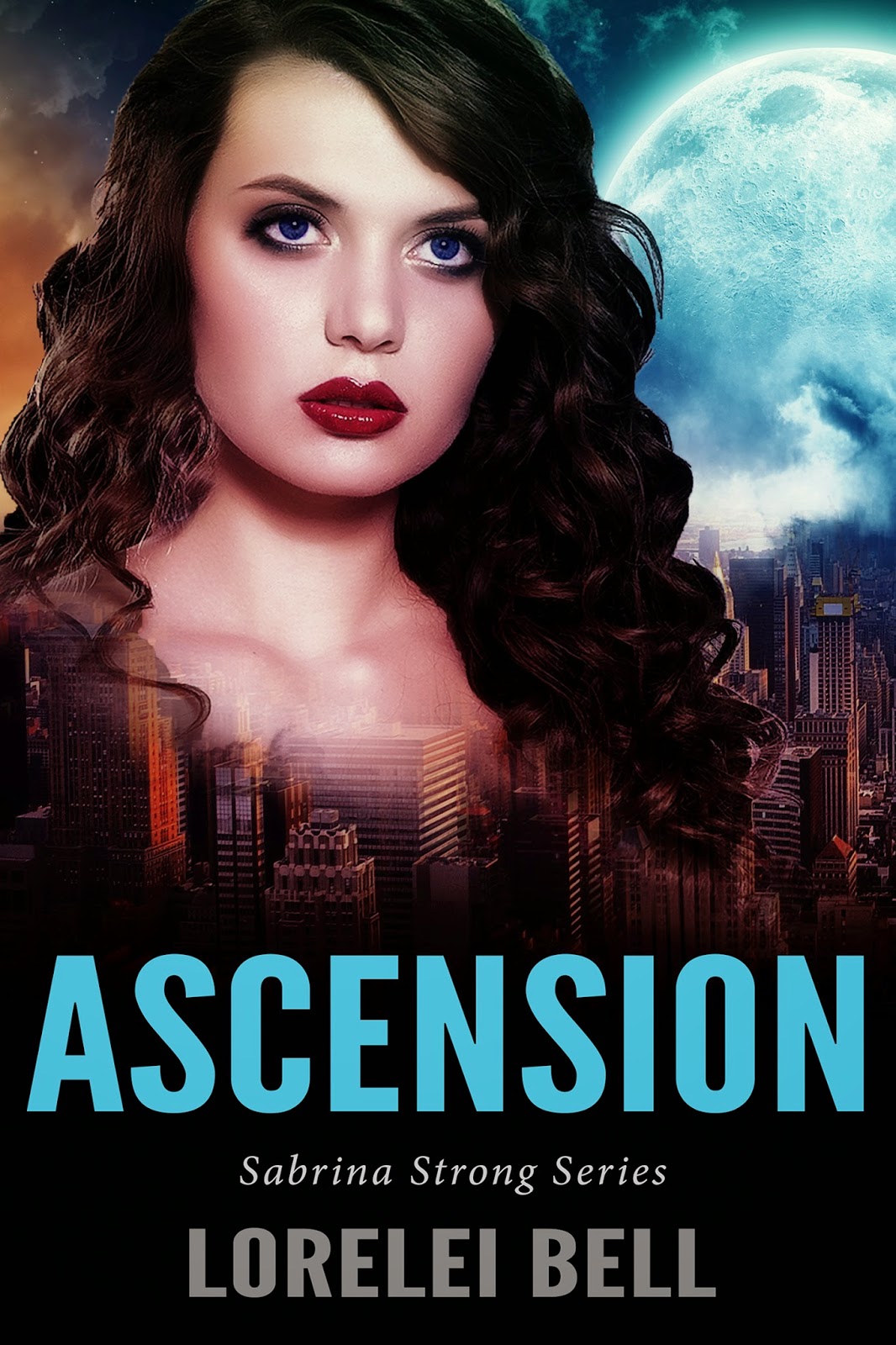 SYNOPSIS:
After the death of her father, Sabrina Strong is hired to solve the murder of Letitia, Bjorn Tremayne's life-time mate. She is quickly immersed in romantic trysts and danger. Megalomaniac vampires are planning to take over and rule the the North American Vampire Association for their own greedy desires.

Sabrina is not thrilled about the aspect of working for vampires in Chicago, but she needs the money, and wants to find the gorgeous and mysterious vampire who has been turning up in her dreams. Is he the one who bit her when she was ten - marked her for his own - and turned her mother so long ago?

A unique and mesmerizing mystery blending intricately detailed fantasy and romance, twists and turns of mystery in a contemporary setting, and new insights on a vampire's life including love, passion, heartache, hope, devastation, lust and longing.

EXCERPT:
My savior was a blood-drinking vampire, and that's what he'd probably been busy with when I'd called. I stifled my desire to bring this to his attention. Usually blood on the collar of a man might mean that he'd cut himself shaving. A vampire, on the other hand, blood on the collar would carry a whole different meaning all together.
“I'm sorry to be such a pest,” I apologized, sliding my chilled feet beneath the covers and pulled my knees up to my chest, hugging them to myself.
“You are not a pest,” he said around a small chuckle. He settled on the edge of the bed beside me. Grasping the covers, he pulled them up to my neck. I realized I was shivering as I gazed at him, letting out little nervous gasps. The erotic overtones of having him in my room were not lost on me. I wondered what might happen, since I had invited him in—and he wasn't leaving.
“You are cold,” he said, his face partially in shadow, the other half glowing in the light slanting in through my window. His pale skin was stark against his neatly-cut black hair, eyes, and brows.
I reached to turn on the light. He stopped me with his voice. “No. Leave it off . . . for now.”
I retracted my hand and settled it on top of the covers as I stared up at him.
“You are a temptation to me, Sabrina.” His voice was low, vibrating in my ears in a way that perhaps a cello might. Calm, sedate, and yet with the promise of something wonderfully exciting, and something wicked hidden beneath the beauty of this other worldly creature here in my room. I could hardly believe it was happening. But it was.
His chilly fingers feathered over my brow, moving strands of my hair away from my cheeks. Those same fingers slid down my cheek to the side of my neck, and paused at the pulse there at the jugular. My eyes slipped shut. Was he using his vampire charms on me to seduce me?
He released a breath.
Opening my eyes, I found he studied me in the dark, his hands slipping across the edge of my nightgown at the ties of the neck. I felt him loosen it, and spread the material open, availing my neck and the upper portion of my chest to him. My breath caught in me.
“Are you going to kiss me?”
“Yes.” He leaned in. “Do not move,” he whispered. His breath slipped over my skin as his head dipped down and I somehow not only held still but held my breath.

now available for Kindle at Amazon 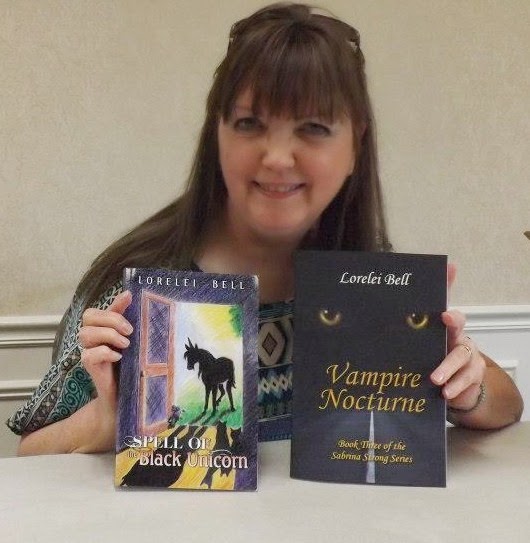 Lorelei's interest in vampires came in her teens watching the original Dark Shadows TV soap, and old horror movie classics of "Dracula" (of course), on TV late at night. As a result, she found that her interests in the macabre, horror/vampire movies made others think she was odd. But she was into vampires way before it was considered "cool".

She wrote her first vampire story in the early '80's. It has never been published, but it has seen many re-writes (one of which is still a work in progress). Today, she has created a heroine (Sabrina Strong) who has to learn who and what she is from the beginning of the series, rather than plopping readers down right in the middle of things, and doing a lot of back story.

"My vampires all have their own personalities. You will not find a cardboard baddie among them. They each have their own needs, wants, and desires, and do fall in love--well, at least a few of them do."

Her writing has been compared to Anne Rice, on the gritty/dark side, and Charlaine Harris on the humorous/lighter side. Romance, horror, and plenty of action and adventure, there's lots going on in this series.

Hey y'all! My Insecure Writers Support Group post is really short today. I've had a head cold for about a week and haven't been feeling up to thinking too hard. My Battle of the Bands post took all my brain power. So today I'm going to set up the links to the IWSG sign up site, our distinguished host Ninja Captain Alex Cavanaugh, and the amazing co-hosts Chemist Ken, Suzanne Sapseed, and Shannon Lawrence.

I'm not feeling  productive, but I am feeling friendly enough to jet around and visit as many blogs as I can today. Plus, it gives me a good excuse to sit back in my chair and avoid the warm sunshine (not to mention all the yard work that spring inevitably heralds).

So what about you, what are you skimping out of to play online this first Wednesday of the month? Or is the one day you reserve special time for blogging?

PS: The results of Battle of the Bands - Styx vs The Driven - was a far cry from a shut out, but Styx did take the win. I was pleased at how many people debated over Drivn though.
Posted by dolorah at 3:00 AM 49 comments:

BATTLE OF THE BANDS: RENEGADE 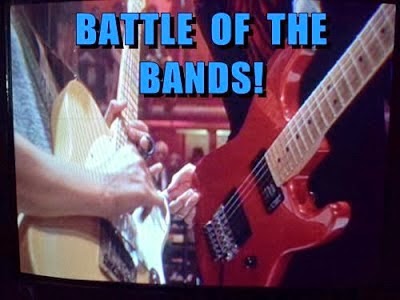 My Battle of the Bands post today is inspired by watching advertisements for the DVD complete series of Sons of Anarchy. I miss that program, and may have to purchase the series some day. Unless Netflix hosts the series until I get tired of it. Or there are reruns somewhere. The series had a lot of excellent music for the episodes; and the commercial for the DVD series has the Styx song RENEGADE as the perfect musical accompaniment.

So I set out to find a cover for the Styx version. Took a long time to find this one by a band called Drivin. "The Driven were an Irish rock band, possibly best known for their 1996 single Jesus Loves You More If You Can Drive. From 1995 to 1998, the band consisted of Brendan Markham (vocals, guitar), Darrin Mullins (lead guitar), Ned Kennedy (drums) and Paul Power (bass). After 1998, Ned Kennedy was replaced by Christian Best. Three of the members later went on to form a group called Citizen." (Wikipedia) The group toured Europe and played alongside a lot of bands, made a couple albums of their own, but never made a hit in the US, so there isn't much available on their career.

Not bad, if you like it LOUD. And ya know I do.

STYX needs no introduction, of course. However, the band Styx (named after the Greek mythology river forming the boundary between Earth and the Underworld, "is an American rock band from Chicago that became famous for its albums from the mid-1970s and early 1980s. They are best known for melding the style of pop rock with the power of hard-rock guitar, strong ballads and elements of international musical theater." (Wikipedia source). I got lost in all the song/video links on YouTube while putting this post together, which is why it is up late and not up to usual info standards.

What do you think, pretty close match between the unknown and the superstar?

Visit Stephen T McCarthy for a complete list of other Battle of the Bands participants, and enjoy a very musical Sunday.
Posted by dolorah at 1:32 PM 27 comments: