Oh hey! Its Insecure Writers Support Day. Ya know; first Wednesday of every month. EVERY MONTH.

Like, (face palm) duh, how could I forget? Well, easy peasy, for me. Not like I did not remember - nah, its like, I know its coming, I know what I need to write, I know I need to write a post, answer the question, have something to say . . .

And then, POOF, the thought flits in and out of my brain. Instantly. There and gone!

So I'm unprepared; writing this after 10pm Tuesday. I posted though . . right?!?

April 3 question: If you could use a wish to help you write just ONE scene/chapter of your book, which one would it be? (examples: fight scene / first kiss scene / death scene / chase scene / first chapter / middle chapter / end chapter, etc.)

FIRST CHAPTER!!! I have a completed trilogy (counting the two books I lost in a computer transfer and need to re-write) and just have never been happy with the first chapter of the first book. This has been through more changes than a baby in their first year of life. I've submitted the novel too many times, to all manner of Agents and publishers, and have yet to garner any interest in the novel. Its the first chapter, I'm sure.

My MC is just not likeable in the first chapter - or two. She is not heroic, funny, goth/emo, bitchy.  She is just - Amy. Boring, recluse, scared. Not YA angsty or dramatic. This is a Women's Fiction novel. A bit of romance triangle, domestic violence, addiction, an abusive childhood, and lots of regret and future hopes.

I think the novel lacks hair flipping, furrowed brows, clenched jaws, and a first person POV. (LOL, yes, that was meant as a joke - mostly.)

I read (audio book) on impulse by a novel by Tami Hoag. I have read several of her mysteries, and I like her writing style. There was an audio book staring at me the last about four months at one of my Golden Gate stores, and finally I bought it. I should have known it would be a category romance by reading the title, TAKEN BY STORM. I guess I just could not believe it would be a romance. But yeah, it was. Now, I like Tami Hoag, one of my favorite mystery authors. TAKEN BY STORM was seriously your typical category romance. All the furrowed brows; clenched jaws/fists; furrowed brows; dual hot, head jumping perspectives; main conflict a job the love bad guy won't give up, distrust of promises . . . ya know, category romance.

And I'm wondering: if I really want to be Traditionally Published, do I need to adhere to all the YA/Romance lingo? Do I need to have more drama?

No, I'm not disrespecting the Romance genre. I happen to like several aspects of the genre (uhm, RomComs are a secret guilty pleasure), in its various subgenre's; but I'm not sure I want to write it.

And thus, the problem with rewriting the first chapter to make my main character more likeable to today's reader. Or write it as an action novel from the man's POV. Which negates the fantasy of "women writing for women, about women" category.

I'd like to use this quandary for my excuse for not writing at all right now. But sadly, even I know that's pure BS. 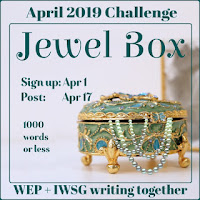 Oh yeah, the WEP/IWSG linky is open for the April Challenge - Jewel Box.

While I'm driving, I come up with several story starts, then forget them by the time I get to a hotel and have a few minutes to think about writing.

The wine and sleep usually win out.

I know - I should be re-writing that first chapter instead of wishing on the magic writing Genie for a quick fix.

I'm late this month for everything. It may be early in the month for most of you dedicated authors; but in my sales world, I'm a month behind. Spring is great weather wise, but it brings on a lot of extra time servicing my stores, resetting programs, counting credits for returns, restocking with tons of product. Seasonal changes are not fun, or easy. This week is worse than most others. I think. It could be normal and I'm too tired and addle brained to know any better.

I'll get around to commenting this weekend. Sorry for the delay. Good think IWSG is this week and not next week or I would not be able to  post/comment at all. And while I hope to write something for WEP, this and that are the only posts for this month. Its A-Z blogfest month, and this is not the time for me to make my first commitment. But congrats to all who are participating.

Thanks Ninja Captain Alex, who is the IWSG creator, and his co-hosts: J.H. Moncrieff; Natalie Aguirre, Patsy Collins, and Chemist Ken.