Well, here it  is, my GARDENS post for Write Edit Publish (WEP) challenges, hosted by Denise Covey and Yolanda Renee. All I can say is, it takes place in a garden. This is something I started a while ago, but haven't figured out what to do with it. I hope it loosely fits the criteria for this prompt despite the lack of beauty. 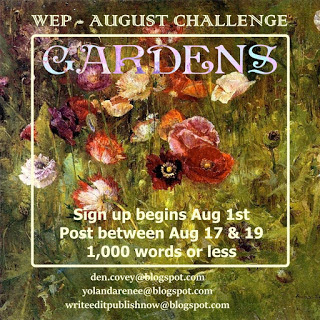 I was born twenty six years ago, in Year 133 by my clan’s reckoning. The oldest clan in our territory – those that lived under ground since the end and only came out about 4 years before my birth - counts time back 451 years; the youngest clan marked seventy one from day of destruction. But who, besides Rovers and time keepers, is really counting; and not every clan has time keepers.

Some things from the old world haven’t changed. Hours in a day, days in a week, months that make a year. It is said the Universe did not notice the self destruction of one civilization on the youngest planet in the solar system; time moves on, civilizations rise and fall. People gotta eat, and breed.

Only the timekeepers know the secrets of past and future; those obsessed with keeping and reading journals, making calendars and marking off days, listing events. Time-keeping is a revered skill in our clan, and my parents were teaching me the tradition until my grandfather diverted my education when I was twelve.

He had the courtesy to ask me first, which was strange and exciting at the same time. He said, “Jensa girl, is this really all you want to do with your life?”

I loved my grandpa more than anybody, so I immediately said ‘no Grampy,” just because I knew that was the answer he wanted. Some years later I had occasion to regret my quick response, but only for a fleeting moment. I’ve seen the world outside these walls, fought the living and the dead, tallied the worth of the present, and insured the continuity of the future.

Sitting in the village garden today, listening to the Tillerman Rover’s proposal for uniting our clans, I was glad it was my grandfather’s advice that would sway the Counsil and not mine.

As Rovers, Grampy and I had logged the births, deaths and continuing line of the Tillerman’s, knowing it was just a matter of time before our own distant clan would attract their attention. I felt safe in this man’s presence not only because of my skills with bow, knife and words; but also because I was childless. Tillermans only bred outside their clan with women who had already proven fertility and living children.

I pricked my finger on a blackberry vine and wondered if it was an omen.

The heir, Vigor Tillerman, had been here a year before in the guise of a Rover gathering information. The gloves and long sleeves hid his identifying tattoo on wrist and palm, but he’d left plenty of euphemisms about his true lineage before leaving town. Grampy and I both considered him an arrogant prick, unworthy of even our lowest pure bred.

“I have recorded all births within my clan in the last six months, and none of the women claim to have slept with Vigor during his undercover visit. I have all the names of the fathers.”

“And you question every girl who is actively having intercourse? Do you pry into the private lives of all your citizens?”

“Yes we do,” I answered too loudly.

The gardens were positioned close to the gates to insure tranquility and quiet for relaxation, and introspection. We traded squash, beets, beans, corn, tomatoes, a variety of berries, grapes and other vine fruits, and even some of the flowers; but this community garden mainly fed our clan. Time keepers insured all citizens worked their allotted shifts in either the gardens here, or the orchards to the south; but many of our community preferred to contribute in the gardens and had never seen the outside.

Several citizens looked up from their hoeing and harvesting fearfully, though we hadn’t had an attack in my lifetime.

“Vigor has provided the name of the girl, the date of the assignation, and expects she should have conceived already. He is willing to pay tribute for the bride and to claim the child – providing it is healthy and still living.”

“He should pay for the conception regardless of outcome,” I said, accepting a cold lemonade from Maria, a constant gardener.

“Now Brent,” the Rover began, addressing Grampy and ignoring the apologies for my outburst from Counselor Erve.

“My granddaughter is right,” Grampy acknowledge. “However, if there is proof of paternity, and the girl is willing for the barter, we may come to some arrangement.”

I drained my glass to keep my tongue still. Sneaky, under-handed . . We’d turned Gage Tillerman’s proposals down twice prior to his bastard-heir’s not-so-secret visit. Commodities we had in plenty, as well as arms and a fighting force. What we needed, and Tillerman refused to barter, was an infusion of healthy, male donors. Our counsel was not even demanding long term contracts or support, though it would be greatly welcomed.

Too many female births, too few bartered males, inbreeding. The weakness was becoming noticeable among the other clans. I had an idea which family might be concealing a birth, and why. I picked up a hoe and headed towards the east wall where the new vegetable plot was planned. Slashing at the earth would help settle my anger, organize my arguments, and help the community grow.

The growing season was about to begin, and this year the bumper crop wouldn’t be confined to the soil.
* * *
Leave your comments if it pleases you, and if you'd like to read other participants to this challenge, or submit your own interpretation, click here for the list. Linky closes on Aug 19.

Wow; did you notice its August already? Pretty soon it will be September, and then OMG October, and my birthday again. I think I could stop having those now, I've reached a ripe enough age.

I missed posting for IWSG! I was all set to write up my post when I discovered my battery was down to about 15 minutes- and I left my charging cord at a hotel four hours away. Ugh. Two days later I had a new cord (couldn't find one in a thrift store), was two days behind on work paperwork, slow internet access, and I was just plain tired. I really wanted to post for this IWSG too.

Oh well, I didn't really have the time to go visiting and commenting for this massive monthly event. Besides, I wrote a short story- yay me. About 3600 words, written then submitted to THE FIRST LINE magazine. (Thanks Shannon for the link.) Because I waited til exactly the deadline *hangs head in shame* I did not allow proper time for my CPs to fully crit, so I self edited and hoped they wouldn't find too much cleaning up to do (in case it is rejected and I need to find another place to submit it).

Needless to say, the submitted piece is a mess. But I had fun writing it, and will also enjoy tweaking it again, so even if it gets rejected for lack of editing, at least I wrote something. *pats self on back*

All this to say I've been really busy with work, traveling, and I'll be even more pressed for time throughout this month. I'll be working with my training supervisor again, and should be getting that iPad to make the paperwork much less a hassle. That will be fun to learn and use.

I'm missing all my writing friends, I'll catch up as time allows.